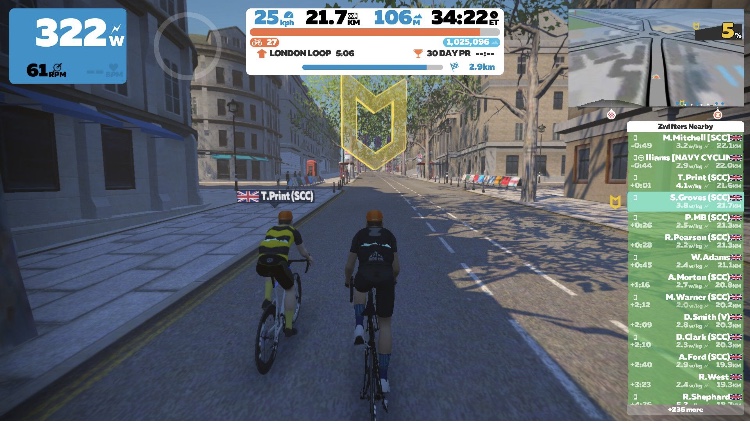 Tusday saw our first club handicap race on Zwift. It was a 25km circuit around virtual Greater London taking in sights like the Mall, Nelsons Column, Embankment etc. The C classified riders set off first followed by the B’s and then A’s. The winner would be an individual rider first over the finish but as in the real world it is essential to work as a team and not go off on your own too early so the chasers do not make the catch. This race the A’s had a distinct disadvantage with one rider out at the start with a snapped chain and a few others not even making the start line. Left two riders with little chance of catching. They had a good go though with Richard Shephard pushing an amazing 5.3w/kg average and Paul Turner 4.9w/kg. However B’s and C’s stayed ahead. C team had real depth and clearly decided early working together was the best option likely to get one of their group home in first and taking advantage of their numbers. Riders like Peter Mills Baker, Wedge, Rick Pearson and Andy Morton went deep in the first half launching the others to power through to an unassailable lead from the chasing B’s. So soon it was clear this race was going to be won by a C rider. Once into the small Surrey hills four C riders of Print,Groves,Mitchell and McWilliams broke away from the rest. Then with around 5km to go Mitchell and McWilliams dropped Groves and Print. The race was on for first. It proved a bit of cat and mouse until 2Km to go when Mitchell went for a long solo finish. However he could not get sufficiently away from McWilliams who closed the gap again into the Mall. So it stayed until the final 150m sprint. Neck and neck with Matt Mitchell just managing to edge out Paddy McWilliams on the line for the win. Groves came in for third again in a sprint to the line with Tim Print. Dan Smith brought home the B’s who couldn’t quite make the catch this time.  A great race. Well done all racers who took part.  Next week brings a new complexity with a brand new course in virtual Japan with climbs and some off road sections. Should make for some interesting tactics!